Together Again After 2 Long Years

On October 18, ARCS Oregon hosted its first in-person fundraising event in two years. Guests reconnected with friends and colleagues, donors enjoyed visiting with their scholars, and of course, everyone engaged with promising scientists from Oregon’s top research universities – OHSU, OSU, and UO.

“Having spent much of my career in a STEM field, I believe it is imperative to expand access to science and engineering disciplines,” said President Murthy. She also announced OSU’s plan to build a Collaborative Innovation Complex, which will house a powerful supercomputer for teaching and research in artificial intelligence, robotics, and materials science. “The facility will help OSU attract top faculty and new ARCS scholars,” she said.

The highlight of the event was a panel discussion on climate change moderated by Lauren Moreno from Catalysis LLC. The panel featured 2 ARCS scholars who are next generation climate scientists. They shared their research which focuses on two distinct areas of climate science – thermochemical energy storage and analysis of historical climate data from the earth’s ice cores.

Kate Rivera, ARCS Chapter Scholar and OSU student, was one of the panelists. She is developing models of thermochemical energy storage to improve the reliability of renewable energy in buildings and other structures. Kate is working toward a future where homes and buildings will be able to consistently capture, store, and utilize renewable energy.

Olivia Williams, the Elizabeth and Peter Lyon Scholar and OSU student, also served on the panel. She is researching the earth’s history of climate change by analyzing data from ice samples. The samples Olivia studies come from Greenland and Antarctica and date back thousands of years. Analyzing climate data from the past informs today's scientists and advances their work to address climate change.

If you were unable to attend in person, click HERE to watch the recorded version. And, if you are inspired by our scholars and our mission to advance science, please consider making a gift today. 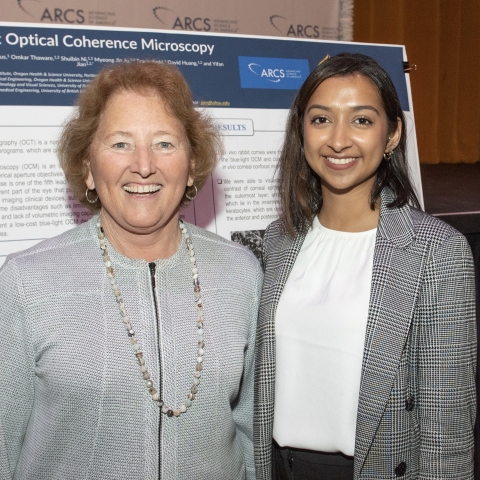