Oregon State University President Ed Ray has created a permanent endowment through the OSU Foundation to fund an ARCS scholar in memory of his wife Beth, a former ARCS member. The gift was announced October 22 at the annual ARCS Oregon luncheon that showcases current ARCS scholars. The Beth Ray ARCS Foundation Oregon Scholar Award Endowment will fund an ARCS scholar award in perpetuity at OSU. ARCS scholar awards are given to outstanding PhD candidates in science, engineering and medical research at OSU, Oregon Health & Science University, and the University of Oregon. The Beth Ray Scholar Award recipient will be selected by the OSU Graduate School.

“Most people think philanthropy is about giving money to other people,” President Ray said in his remarks at the lunch. “It’s not, it’s about investing, and ARCS is an excellent investment.” Remembering his wife’s time with ARCS, President Ray went on to say, “Beth loved the work ARCS did, and I had the good fortune to meet some of the scholars and go to activities when she was a member. What I discovered is that ARCS is an incredibly effective organization.”

Beth Ray, a former business law professor, academic counselor and assistant dean of academic advising, was a perfect fit with the philanthropic women of ARCS, which stands for Achievement Rewards for College Scientists. She was a member from 2011 to 2014. OSU renamed its Student Success Center as the Beth Ray Center for Academic Support in 2014 in honor of her tireless commitment, along with her husband Ed, in attending campus events and supporting students.

“Our chapter is honored that a university president would make such a generous gift to create an award into the future,” said Julie Branford, ARCS Oregon president. “Besides saying so much about his beloved wife, President Ray’s donation demonstrates his faith in the ARCS mission of investing in graduate students.”

President Ray made a $100,000 gift to Oregon State University Foundation to create the endowment, which was matched with $50,000 from the OSU Graduate School and $7,500 from ARCS Oregon.

ARCS Oregon has raised $4.5 million dollars and funded 274 scholars since its inception 15 years ago. ARCS scholars, selected by university committees, are given $6,000 a year for the first three years of their PhD study and research. The universities use the ARCS awards to recruit the best PhD candidates to Oregon’s top research programs. ARCS Oregon supports scholars at six science-related colleges within OSU. 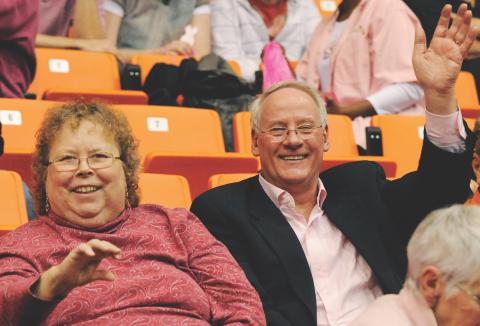