Ideas for innovation in any scientific field can take years to bring to fruition, and more so within the complexities of nuclear power.  It has taken decades for Jose Reyes, PhD, to finally witness development and acceptance of small modular reactors with the company NuScale Power. Reyes is the chief technology officer and co-founder of NuScale, headquartered in Portland with 1,600 employees and 26 contracts in the U.S. Oregon State University is woven into Reyes’ long journey to successful innovation.

The magazine Popular Mechanics recently praised the advances of NuScale’s small modular reactors, which take up 1% of the space of a conventional reactor but packs 10% of the power. The flexibility of the small modular reactor (SMR) design goes beyond delivering always-on baseload power— it offers scalable advanced nuclear technology for the production of electricity, heat, and clean water to meet human needs. With a smarter and simplified design, SMRs are able to reduce internal and essential staff and reduce production costs. The small and scalable nature of the plants fits more locations and budgets while still meeting expanding energy needs.

Reyes is former head of OSU’s Department of Nuclear Engineering and Radiation Health Physics, and continues as professor emeritus there. He is an internationally recognized expert on passive safety system design, testing and operations for nuclear power plants. He has served as a United Nations International Atomic Energy Agency technical expert on passive safety systems.  He is a co-inventor on over 110 patents granted or pending in 20 countries.

A few years ago ARCS Oregon members, scholars and supporters heard Reyes describe how $4,000 and an idea were incremental steps that led towards NuScale, a journey that inspired ARCS Oregon scholars and attendees at that Scholar Awards Luncheon.

ARCS Oregon scholar alum Jeffrey Luitjens PhD works as a Thermal Hydraulic Analyst for NuScale. “Being part of the NuScale family for the last 9 years has been an exhilarating experience. I have always wanted to do something impactful in my life with the studies and degree that ARCS Foundation Oregon has helped to support,” Luitjens said. “The NuScale vision of providing accessible carbon-free power pairs well with my desire to make a difference in people’s lives throughout the world today, and for future generations. In addition to that fulfillment of social responsibility, it is exciting to be part of a company that is developing an innovative technology.”

Professor Wade Marcum, PhD, was ARCS Oregon’s first OSU scholar in engineering and is now OSU Nuclear Science & Engineering Associate Dean for Undergraduate Programs, and the Henry W. and Janice J. Schuette Professor in Nuclear Science and Engineering. “Today, largely because of the efforts of Dr. Reyes in building his department, Oregon State University has one of the top ranked schools of nuclear science and engineering in the nation,“ Wade says. “At the same time, NuScale Power is a thriving company with a unique solution to meet the world’s energy needs.”

The Popular Mechanics article on NuScale included these statistics:

Rita Baranwal, the former assistant secretary for Nuclear Energy at the Department of Energy, stated that previously “customers only had one choice for nuclear, a gigawatt-sized power plant.  Now we are talking about megawatt scale that can flexibly meet a customer’s energy needs.” Ken Canavan, Westinghouse Electric CTO, says, “The capacity (small reactors) offer, and the capability they provide, is just irreplaceable”. 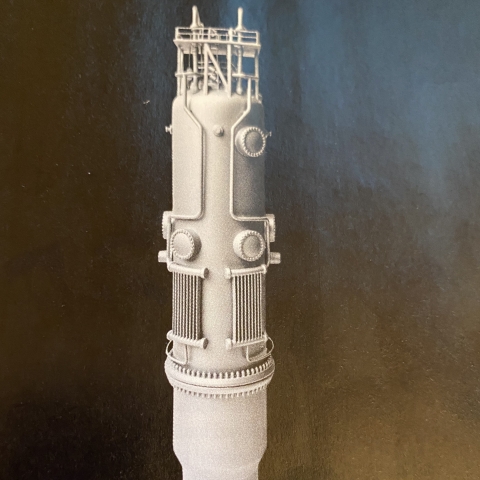