"I never dreamed that Alexa would join ARCS at such a young age, but to my surprise, an interest was sparked when she accompanied me on a three-day trip to film the chapter’s video at OHSU, OSU, and UO. She became more engaged with the scholars as each day passed, understanding their research from what she had already learned in school. For example, she understood one scholar’s work because she had studied the concept in her physics class,” Caron explained. “Science is now centered around the multidisciplinary STEM approach, teaching students how subjects within the various branches of science are inter-related.”

Alexa joined her mother and grandmother at events during the ARCS All Members Conference (AMC) in September 2019 and was fascinated by learning about whales during the marine science tour of the Oregon coast and about cancer research from the lectures in Portland. “Alexa has the critical thinking brain, so ARCS research topics are right up her alley,” Lara said. “I’m super excited that she has an interest in science. She’ll be an asset to ARCS.”

Alexa said that the video filming and AMC experiences were pivotal. “I got to meet the scholars and hear how much the ARCS Scholar Award impacted them. I wanted to be part of this organization that helps students.”

Caron and Lara agree that building a pipeline of new ARCS members is important. Young women who don’t remember Sputnik can be energized by the ARCS mission and develop a passion for science by observing ARCS scholars as they develop real-world solutions combined with changes in STEM education that focus on hands-on, multi-disciplinary teaching. Caron said, “Times have changed since ARCS was first organized and we need to make changes to the organization to attract women of today. Younger women can bring new perspectives." 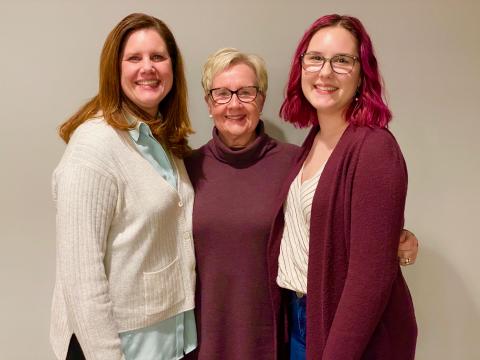