Techniques for scientific research are constantly evolving, especially for the ARCS Oregon scholar alums who are starting their careers. The three scholars who participated in the panel discussion at the “Recognizing Genius” Scholar Awards Luncheon on October 22nd talked about drones that study marine mammals, radiation medicine and how cells repair DNA damage. They shared their journeys through graduate school, and for two of them, into careers. Jackie Wirz, PhD, and an Assistant Dean in the OHSU School of Medicine directed the panel discussion.

Hearing from the scholars gave the audience a glimpse of what inspires them and why it is important to support science.

Shea Steingass, PhD from Oregon State University, focused her research on the spatial habitat distribution of Pacific harbor seals in Oregon. Today she serves as Marine Mammal Program Leader for the Oregon Department of Fish and Wildlife.

Erik Toraason, a PhD candidate at the University of Oregon’s Institute of Molecular Biology, is interested in how cells repair DNA damage that underlies many diseases, including infertility and cancers.

Garth Tormoen, MD/PhD from OHSU, is a chief resident in the Department of 2019Radiation Medicine. His research interests involve understanding the interactions among blood coagulation, anticoagulants and tumor biology with special focus on how these influence the response to radiotherapy.

Donors, ARCS members, community leaders and friends filled the capacity audience at the Multnomah Athletic Club as the ARCS Oregon Chapter celebrated its current 71 scholars. Selected by the three universities, these scientists are pursuing PhDs in engineering, science and medical research at OHSU, the University of Oregon and Oregon State University. 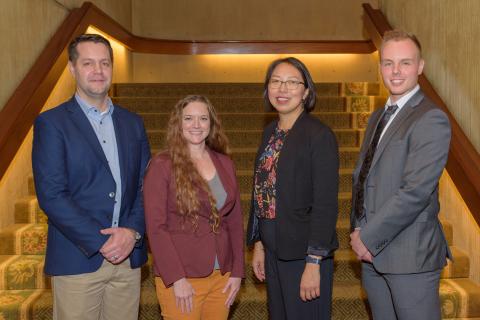