Corporations Understand the Value of Attracting Outstanding Students to Oregon 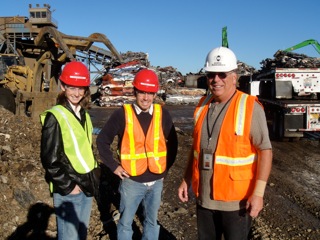 One such partnership developed in 2008 when Schnitzer Steel Industries, Inc., one of the nation’s largest recyclers of scrap metal, stepped forward to sponsor a scholar in mechanical, industrial and manufacturing engineering in the College of Engineering at Oregon State University. Since that initial sponsorship, Schnitzer Steel has sponsored six scholars.

Schnitzer Steel is convinced that its future and the future of our country’s economy depend on a highly educated and talented workforce, and support of education at all levels is a focus of their charitable giving program. The company understands the value of attracting outstanding students to our region. OSU and Oregon Health & Science University have been effective incubators of new businesses and business ideas, which have produced direct benefits to our state through investment and employment opportunities. Schnitzer Steel believes that providing these institutions the tools they need to attract the most talented students will be important to their success in the face of increasing competition, both in the United States and abroad.

Schnitzer Steel’s support of ARCS scholars illustrates the leveraging power of partnerships among private enterprise, public institutions and nonprofit organizations. In an era of increasingly constrained resources, it will take these kinds of creative approaches to maximize the value of donors’ dollars and organizations’ budgets. Schnitzer Steel believes that ARCS Foundation provides an outstanding model for these partnerships.

Hoffman Construction has been a major corporate supporter of ARCS Foundation Oregon. Hoffman, partnering with Wayne and Julie Drinkward, has been an Einstein Presenting Sponsor of the annual Recognizing Genius Scholar Awards Luncheon for the past three years. This top level of sponsorship helps to make the luncheon a financial success, which means more dollars for scholar awards. Wayne Drinkward is president of Hoffman Construction.

Hoffman Construction, headquartered in Portland, is one of the largest general contractors in the United States. The company is proud of its long history of “giving back” throughout the Northwest. Strong science and engineering education is the backbone of Hoffman Construction, which recognizes that a highly skilled workforce strengthens the company, and the community.

In addition to being a top level sponsor of the ARCS luncheon, Hoffman Construction has also donated meeting space and given ARCS members a tour of the headquarters for the Port of Portland, which has a platinum certification as a Leadership in Energy and Environmental Design. The building has received numerous awards for its environmental features.

“The worldwide value of encouraging research in medicine, science and engineering cannot be overstated,” according to Wayne and Julie Drinkward. “It is tremendously exciting to have such an effective vehicle as ARCS Foundation encouraging this research right here in Oregon. ARCS Foundation is a wonderful organization with an important mission. We are truly glad for the opportunity to support ARCS,” they said.

Wells Fargo embraces education as a major focus of its corporate philanthropy, community support and employee volunteerism. This commitment stems from its strong belief that quality education is an essential building block for a healthy community.

To augment its efforts, Wells Fargo partners with high performing nonprofit groups, such as ARCS Foundation Oregon Chapter. The company believes that more can be accomplished through joint efforts, making this partnership with ARCS a natural extension of that corporate belief.

Wells Fargo has been a corporate sponsor of the ARCS Oregon Scholar Awards Luncheon, an annual event in the Portland community that exemplifies Wells Fargo’s commitment to ARCS Oregon and to our community. "We realize that increasing tuition costs, rising student debt, and decreased public funding could mean that fewer young people choose to enter science research. Our goal in partnering with ARCS is to provide encouragement for scholars and express our corporate belief in the value of science education."

"In addition to our support of the Scholar Awards Luncheon, we have chosen to sponsor an ARCS scholar. This partnership between Wells Fargo corporate philanthropy and ARCS to support scholars at Oregon State University and OHSU expresses the company’s commitment to education in a tangible form. It will encourage innovative new technologies, bring brilliant and creative people to the community, and stimulate the economy of Oregon." Wells Fargo supports ARCS scholars and believes that this commitment to science research brings investment and business opportunities to our region and benefits our community.

According to April Sanderson, Regional Director, The Private Bank, “It’s rewarding to support ARCS with their mission of attracting the best and the brightest scholars to Oregon. The scientific research being done by these scholars is advancing the intellectual capital needed for our businesses today and in the future.”

Corporate sponsorship creates a mutually beneficial relationship, as students receive local corporate support for their education and, in turn, become the skilled workforce that companies need to succeed in an increasingly competitive global environment. These corporations know the value in attracting stellar individuals to Oregon. The Portland Chapter welcomes the support of many Northwest corporations and foundations. These corporate donors support ARCS Foundation scholar awards or underwrite the Scholar Awards Luncheon. Here is the cumulative list for Oregon Chapter's first ten years: